What are you looking for?

Parque Warner is the perfect destination for a getaway with your family, partner or friends. You can enjoy the best entertainment imaginable while immersed in the world of cinema! You’ll have an amazing time at our theme park dedicated to the movies of Warner Bros,  and of course there’s also our water park, where you can cool off and relax at the same time.

Parque Warner is located in San Martín de la Vega, just 30 km from Madrid and very close to all other locations in Spain. It’s one of the main tourism and entertainment destinations in the Community of Madrid.

Our facilities benefit from a privileged location, close to Madrid and various other iconic municipalities that are perfect for tourists, such as Aranjuez and Chinchón.

At Parque Warner, you can enjoy a unique European theme park dedicated to Warner Bros. and athemed water park with all your favourite characters.

Parque Warner contains 5 thematic areas, all designed around the world of cinema, cartoons and your favourite superheroes. You can feel like a real movie star on Hollywood Boulevard, take part in a cartoon episode with the mischievous Looney Tunes at Cartoon Village, experience a classic Western movie up close in the Old West Territory, visit unimaginable cities like Gotham City or Metropolis at DC Super Heroes World, or play the leading role in the filming of a movie at a real Californian movie set in Movie World Studios. You can also enjoy a wide range of different culinary options, attractions suitable for all visitors, decorated stores and themed shows throughout the season.

At Parque Warner, you are the lead character: immerse yourself in endless different surprising adventures, one after another. At this theme park, you won’t just remember the movies, you will bring them to life yourself. Get ready to discover a place where you can find all your favourite superheroes and the most entertaining cartoons right in front of you. You will enter a world where everything is real. Unleash the adventure.

Parque Warner Beach is a refreshing and fun waterpark, and the best place to enjoy an exciting summer’s day in Madrid. With 40,000 m2 dedicated to attractions, restaurants, rest areas and a store, this is the perfect environment to enjoy with all your family and friends.

At Parque Warner Beach you can enjoy life without a care in the world. A water park like no other, full of excitement, pleasure and relaxation.

You’ll also find a wide range of food options, themed shows and stores with original merchandising , to complete a unique experience for all the family at our parks: Parque Warner and Parque Warner Beach.

Our partner hotels in the municipalities around the park will make your visit to Parque Warner and Parque Warner Beach a complete experience in a world of unlimited fun.

Come and enjoy the experience with us! We’re waiting for you!

Parque Warner Beach opened on 17th June 2014. It came into being as an additional water area of Parque Warner and was introduced by actor and model Laura Sánchez as honorary patron.

A space full of exciting new adventures where visitors can cool off, enjoy and relax in the company of their family and surrounded by their favourite characters from the Warner Bros factors, such as the Looney Tunes, the Flintstones and Scooby Doo to name just a few.

After more than 10 months’ construction work and more than €8 million in investment, Parque Warner Beach became a reality, and in it’s first stage it had more than 30,000 square feet of water fun so all our visitors could enjoy themselves and cool down together. A new experience which thrilled all our visitors.

In 2017 a new ticket access was included for the public, which allowed the option to enjoy a new park independent of Parque Warner. From then on it was the perfect complement to Parque Warner and combined tickets were set up for the two parks, in categories of 1, 2 and 3 days of fun.

Parque Warner Beach is unique in Spain for its design and theme with the cartoons of the Looney Tunes, the Flintstones and Scooby Doo. Playa Malibú is at Parque Warner Beach, with large areas of natural sand and a beach dotted with sunbeds in order to relax and sunbathe. It also has two wave pools: one for adults, and one especially designed for children. This area also has a

VIP Zone for the relaxation of visitors which will transport them to the most elegant waterfronts of the Californian coast and where they’ll have towels, lockers, sunbeds and customised waiter and drinks service available.

is designed for all ages. It’s an island with eight slides, full of water games, with waterjets everywhere to guarantee maximum fun. There’s also a special area for the kids, Todos al Agua, a heavenly island consisting of slides and many games. Río Loco is a relaxed and winding circuit made on board a rubber ring and which delights adults and kids alike, including a 10,000 litre tank which is poured as if it were a tsunami. It’s the most refreshing surprise on the circuit. To take a break from the water fun, Parque Warner Beach has two themed restaurants: Gran Kahuna, the place chosen by the Flintstones to eat burgers, ribs, kebabs and grilled chicken on their beach day; and; y El Embarcadero, a fast-food restaurant where Shaggy Rogers, the adventurous friend of Scooby Doo, has just finished parking his Mystery Machine van, after a day of surfing.

In 2018, we opened a new water zone themed in DC Comics with 6 new attractions which excited everyone. Since then, the bravest people can try a unique variety of slides where they’ll feel like real superheroes of the League of Justice. Undoubtedly the best plan for a fun and very refreshing summer day.

The 6 new attractions were unique and with new effects and sensations in each of them to enjoy with family and friends. Undoubtedly a perfect plan to relax and cool down at the same time.

Bends and drops in The Joker: El Tubo de la Risa, a new capsule slide called: Wonder Woman: El Lazo Mágico, slides to share with family and friends with breathtaking bends such as at: Harley Quinn: La Huida and  Batman la Sombra del Murciélago. If your friends are competitive, you’ll be able to compete against them on Superman El Vuelo.

The fun never ends at Parque Warner Beach and there’s also time to relax and sunbathe anywhere in our park with lots of free hammocks distributed across the whole park.

If you haven’t visited Parque Warner Beach yet, don’t hesitate, now’s the time to start planning your most refreshing summer trip. 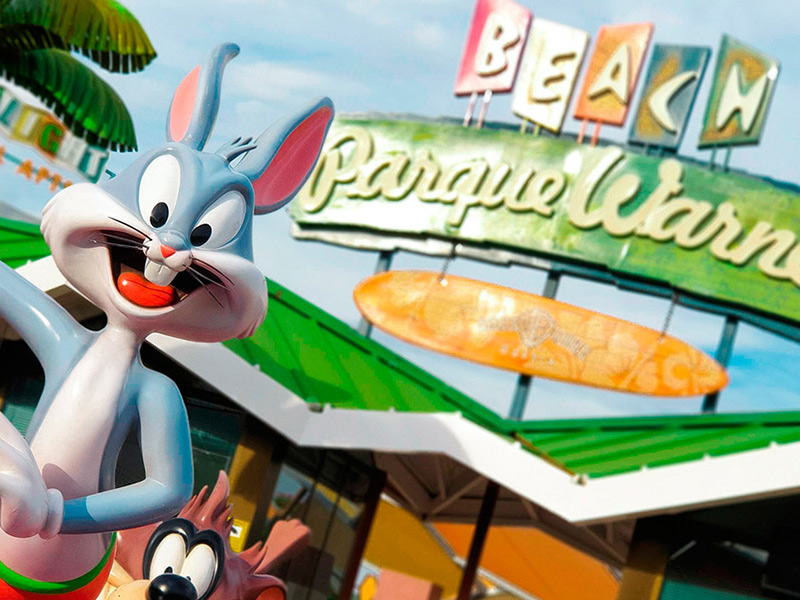 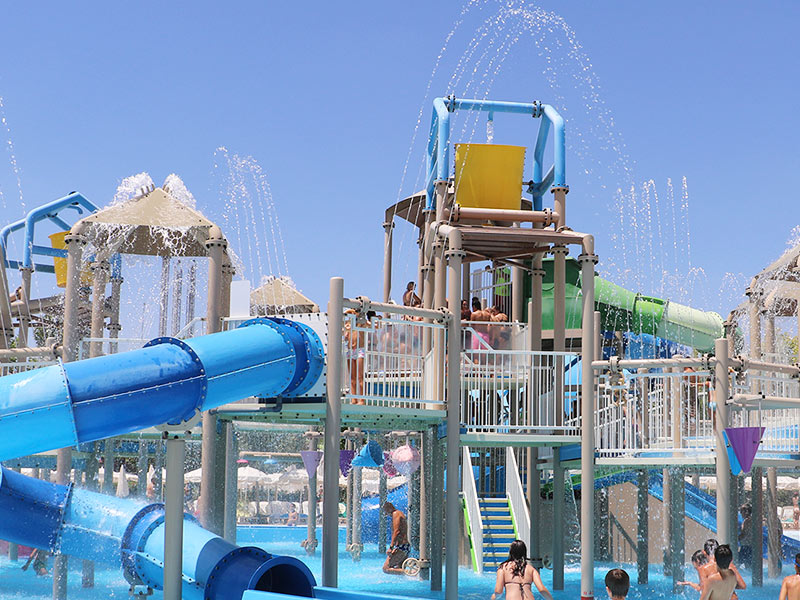 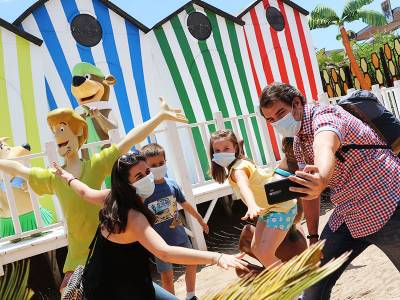 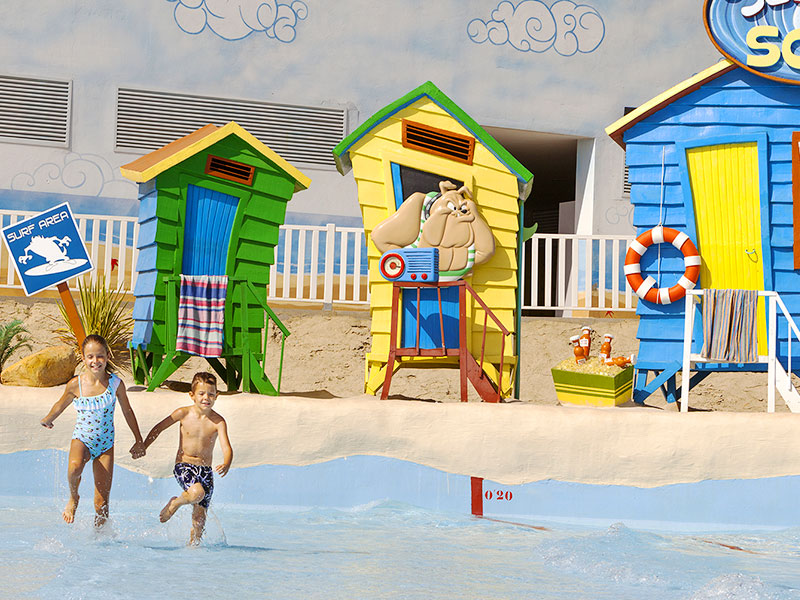 Sign up to get the whole experience and stay up to date on all the latest news, themed seasons, offers and promotions from Parque Warner Beach